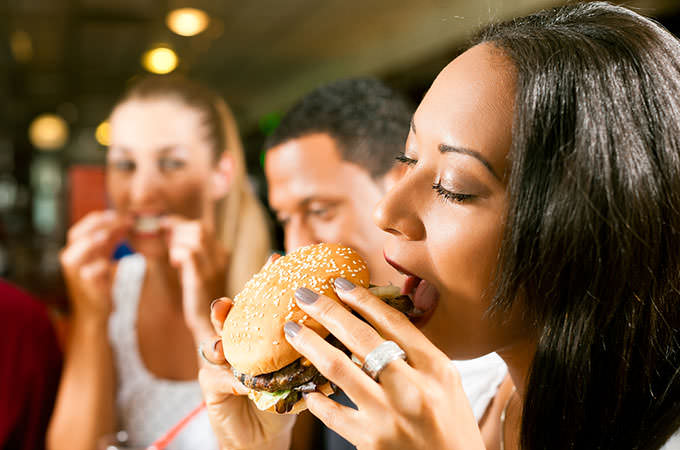 Imagine a huge pile of broccoli, carrots and sliced cucumbers.

Now, imagine a pile of potato chips and a bowl of chocolate chip cookies. I assume you would reach out for the second option.

How many times have you eaten a burger, a cake or had any kind of snack when you weren’t even hungry, just because it looked so darn good?

Or simply because somebody else was eating it? I know I have, but there is a thin line between plain hedonism and food addiction, and oftentimes that thin line is more than enough for us to trip over.

The word “addiction” itself kind of bares a negative connotation no matter the context in which it appears. So, is food addiction just as alarming as other, more severe forms of addictions? This idea has recently gotten much more support from scientists in this field.

Experiments in animals and humans show that, for some people, the same reward and pleasure centers of the brain that are triggered by addictive drugs are also activated by food, especially highly palatable foods rich in sugar, salt and fat.

Much like addictive drugs, highly palatable food triggers “feel-good” brain chemicals such as dopamine, and once a person experiences these increased dopamine levels from eating certain foods, they quickly feel the need to eat again.

Recent studies have shown that obesity has risen at an epidemic rate over the past 20 years so that now, two-thirds of adults in the United States are overweight, and 30 percent are obese. Overweight and obese adults have a higher mortality rate. They are at risk for other chronic conditions such as diabetes and certain cancers.

According to Dr, David Kessler, former Commissioner of the U.S. Food And Drug Administration, about 50% of the obese, 30% of those overweight, and 20% who are at what we consider a healthy weight, are actually addicted to a specific food, combinations of foods or, in some cases, volume of food in general.

We cannot but mention the fast food industry. Its economic influence has not only enabled a radical shift in the country’s eating patterns, but also alter the very way that food is produced. According to Food Empowerment Project, slick multi-billion-dollar marketing campaigns are the true costs to public health, fast food workers, animal welfare, and the environment.

But what is the answer from the powers-that-be? The U.S. government and food industry both encourage Americans to have more “personal responsibility” when it comes to food addiction, obesity pandemic and its associated diseases.

They state that people should “exercise more self-control, make better choices, avoid over-eating, and reduce their intake of sugar-sweetened drinks and processed food.” So far, this just-say-no policy didn’t work quite well. Who knows, maybe if Nike was to start a just-don’t-eat-it campaign, things would start looking up.