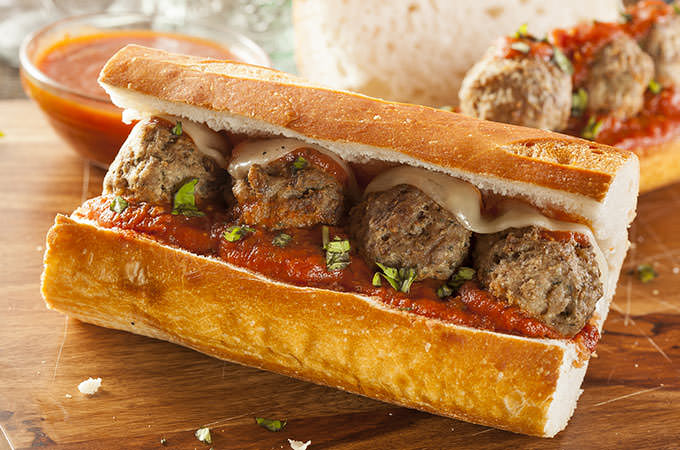 It’s common knowledge that fast foods are among the worst possible things one can eat. There are many reasons for this, spanning from the amount of fat used in their preparation to their calorie-nutritional value ratio.

While some fast foods are not quite as bad, there are also the worst of the worst. In that name, here are the top 10 unhealthiest fast foods in USA.

Depending of what you use to make them, sandwiches can really vary from super-healthy to downright wrong.

As Subway is the biggest sandwich joint in the States, we’ll take their example of the latter.

The Foot-Long Spicy Italian Sub might look really delicious and tasty, but you can bet all you have that this is one of the unhealthiest things you can possibly eat.

Just take into consideration that this particular sandwich contains 960 calories, while it’s also not short on fat and cholesterol.

If this isn’t enough to convince you that this abomination should be avoided, let’s just focus on the fact that this sandwich contains 2,980 mg of sodium. In other words, almost three grams of salt in a single meal! 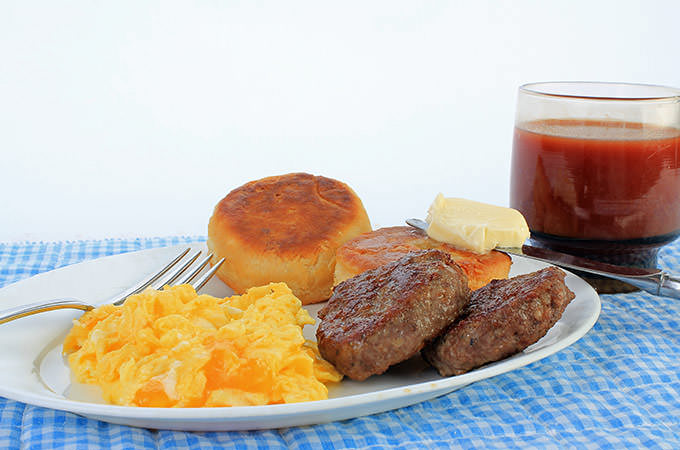 Experts claim that breakfast is the most important meal of the day, as it kick-starts your metabolism in the morning and provides you with energy for the rest of the day.

If you’re planning of having breakfast at Chick-Fil-A, however, this rule doesn’t apply.

The so-called Sausage Breakfast Platter in this fast food place won’t only fail to boost your metabolism, but will actually succeed at slowing it down. Just imagine having almost 60 grams of fat for breakfast!

Other than the obscene amount of fat, this meal is also packed with over 800 calories, as well as 385 mg of cholesterol and 1,800 mg of sodium. Since the ingredients of this meal surpass the recommended daily nutrient intake by a lot, you’ll probably want to steer clear of it. 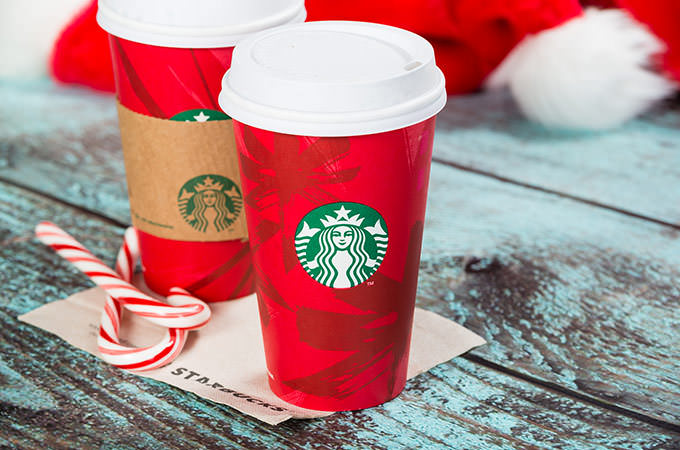 Fast foods aren’t necessarily foods, but can come in liquid form as well. Surprisingly enough, the beverage that we decided to include on our list comes from the same place that serves the best coffee in USA – Starbucks.

The drink in question is the Venti Egg Nog Latte. You might have noticed the word ‘egg’ right away, which is mostly responsible for this latte’s unhealthiness. This beverage contains 29 grams of fat and 300 mg of sodium, all the while weighing 620 calories.

Although you won’t find any cholesterol in the Venti Egg Nog Latte, we assure you that drinking over 600 calories from a single cup can’t be good for you. In fact, you’ll probably be much better off by opting for any other Starbucks drink which is made with low-fat or skim milk, but what do we know? 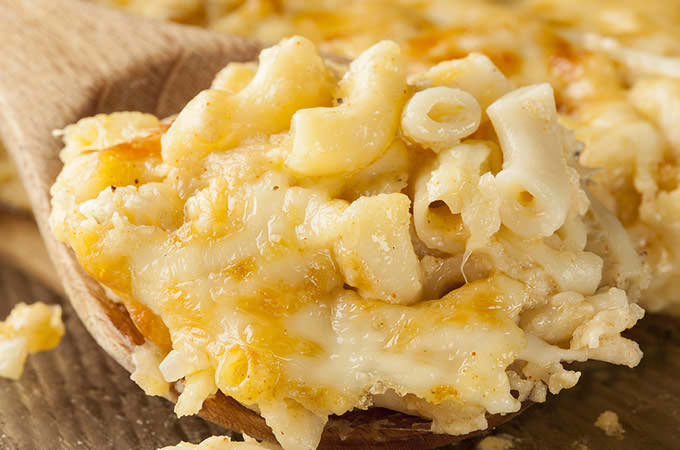 There are only a few way of preparing macaroni and cheese which will provide you with a somewhat healthy meal.

On the other hand, we have the Panera Bread’s version, which is on the completely opposite side of the spectrum.

This Mac & Cheese is really a phenomenon worthy of admiration and awe. It’s really hard to figure out how someone can manage to stuff such a small meal with almost a thousand calories, 61 grams of fat, over 2 grams of sodium, and 125 mg of cholesterol.

It’s cheap, tasty, highly-caloric, bad for your blood pressure, and unfriendly to your cardiovascular health – in short, this Mac & Cheese meal has all the traits of a typical unhealthy fast food. 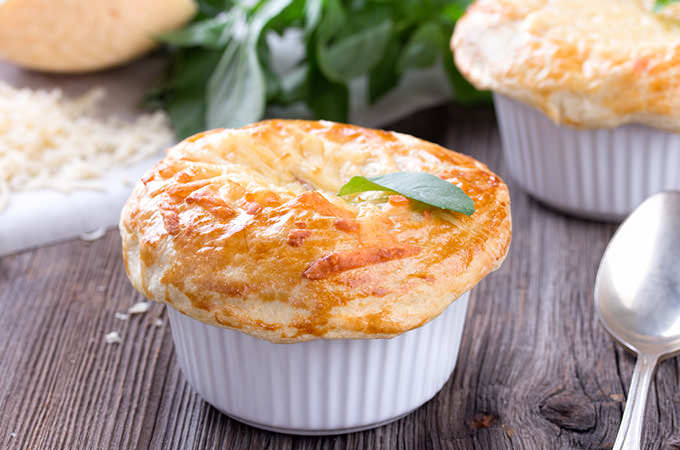 We all love a good, ol’ chicken pot pie. It’s delicious, easy to make, and can be prepared with a large variety of ingredients.

But when it comes to KFC’s version, you might want to think twice.

The Kentucky Fried Chicken is not only known for its – you’ve guessed it – chicken meals, but also for how unhealthy their food can be.

Just as an example, this Pot Pie contains a whopping 790 calories, along with 45 grams of fat, 75 milligrams of cholesterol, and nearly 2,000 milligrams of sodium. If this meal doesn’t scream ‘cardiac arrest’, we don’t know what does. 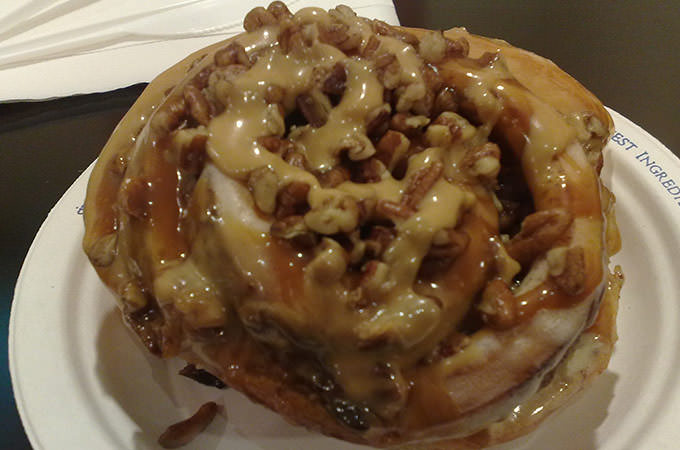 Finally, we get to pass the 1K calorie mark! Our next contestant, although sweet, is no less salty or greasy than any other food on this list – it’s Cinnabon’s Caramel Pecanbon!

Any person who ever watched what they ate in order to keep their waistline at check knows that sweets are your worst enemy in this scenario.

But nothing compares to the Caramel Pecanbon when it comes to sheer amounts of unhealthy ingredients.

This bad boy doesn’t only pack 50 grams of fat, 960 mg of sodium, and 25 mg of cholesterol, but also contains an amazing 1,080 calories. For such a small food, this cinnabon is definitely a force to be reckoned with. 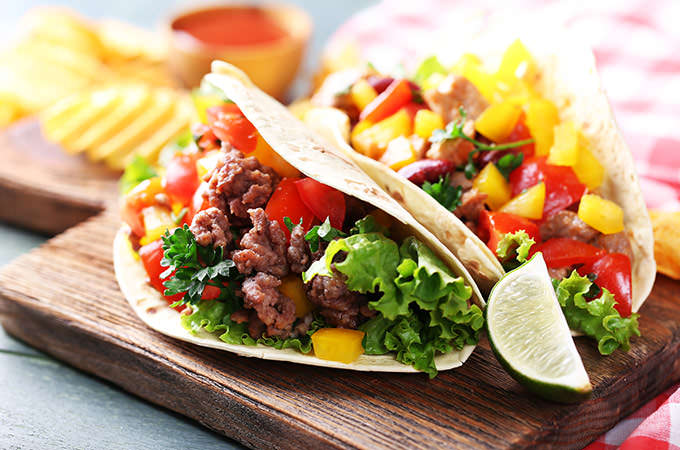 In order for a burrito to be even slightly healthy, you would have to replace the meat in it with veggies, yogurt, and possibly fruit.

However, if you opt out for Taco Bell’s version, you’ll see that they went in a completely different direction.

Instead of telling you what it is made of, we’ll just list how many unhealthy ingredients can be found in the XXL Grilled Beef Stuft Burrito.

Needless to say, nobody in their right mind would want this many calories in a single meal. Add these incredible amounts of salt and cholesterol to the equation, and you’ve got yourself a nearly guaranteed heart attack. 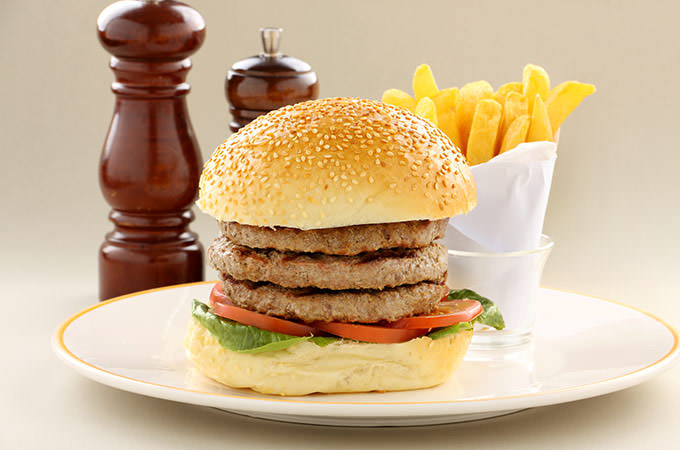 You don’t get to be called Burger King if you don’t serve the greasiest, fattest, most unhealthy burgers of all time. In that name, we present to you the amazing, the outlandish, the supreme Triple Whopper.

There’s definitely something whopping about this burger, and we can tell it’s not its nutritional value. On the opposite, this meal contains 1,160 calories, accompanied by 75 grams of fat, 170 mg of cholesterol, and 1,050 mg of salt.

One patty is comfort food, a double burger is succumbing to cravings, but a Triple Whopper is almost suicide. Just think of how your heart feels when you surprise it with over a thousand calories which you can consume in less than 5 minutes. We would guess ‘depressed’ is the right answer. 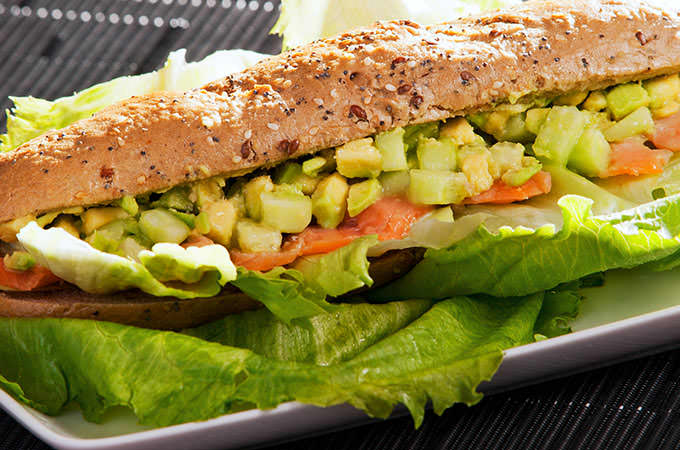 As we’ve said before, sandwiches aren’t necessarily good or bad for you.

But taking an unhealthy sandwich and adding the word ‘salad’ to it certainly doesn’t make it any better, and Chop’t brings the proof of that.

The Cobb salad weighs 670 calories by itself. Add a 300-calorie bread to it and make into a sandwich – now you’re stuck with 970 calories of unholy fast food.

Aside from that, this particular meal also contains 375 mg of cholesterol, 49 grams of fat, and 1990 mg of sodium.

We can’t decide which part of the Cobb Salad Sandwich is worse – the overly-caloric salad or the unhealthy added bread. In any case, the mixture is something you’ll think twice about before ordering it. 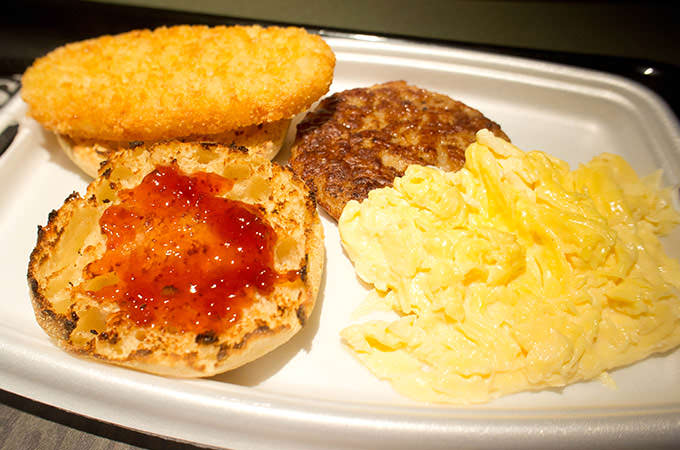 When someone say ‘fast food’, the first logo that comes to mind is that yellow, curved letter ‘M’ on a red background.

And although McDonald’s has a plethora of unhealthy foods on its menu, we had to single out their breakfast offer as the absolute winner.

The Big Breakfast Platter is a good example of what a breakfast shouldn’t have. A plate with eggs, hot cakes, biscuits, hash browns, and a sausage patty isn’t only lacking in important nutrients you need in the morning, but is also overflowing with all the wrong stuff.

This meal includes 56 grams of fat, 2,150 mg of sodium, and 575 mg of cholesterol. While thinking about what this can do to your body, don’t forget that a single Big Breakfast Platter is 1,090 calories heavy. Now, is that really what you want to start your day with? We don’t think so.