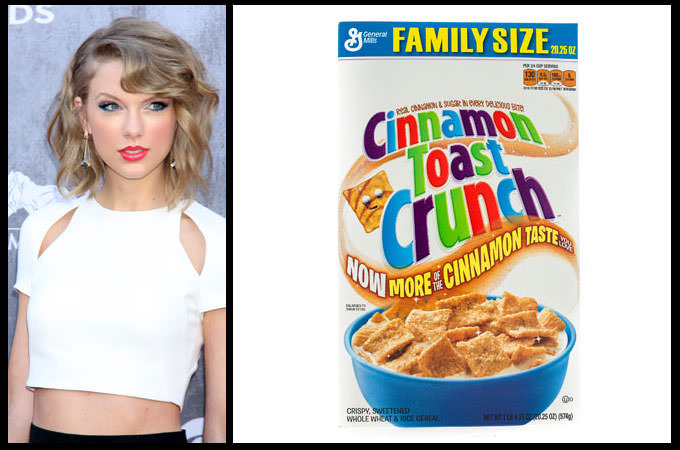 Celebs are human too, and they come in all shapes, sizes, and food preferences. There are celebs that watch every bite and eat foods you can’t even pronounce, but there are also famous people who can eat junk food like nobody’s business. However, unlike most of us, they just have some every now and then and they don’t make it a daily routine. Now, there’s some good advice for us mortals.

This pop/country international superstar might sometimes look like she’s 16, and that’s probably why she just loves to crunch on some Cinnamon Toast Crunch.

The “Bad Blood” songstress doesn’t have this delicious delight often, only when she’s feeling a bit under the weather and when she gets stressed from all of that entertainment business.

This classic kid’s treat is the perfect choice for those occasions.

Maybe she even gets inspiration for her hit songs from a bowl of crunchy deliciousness, who knows?

Either way, she makes sure she doesn’t go overboard with having too much, since she’ll have to cut back from the dating scene and put more time in working out. 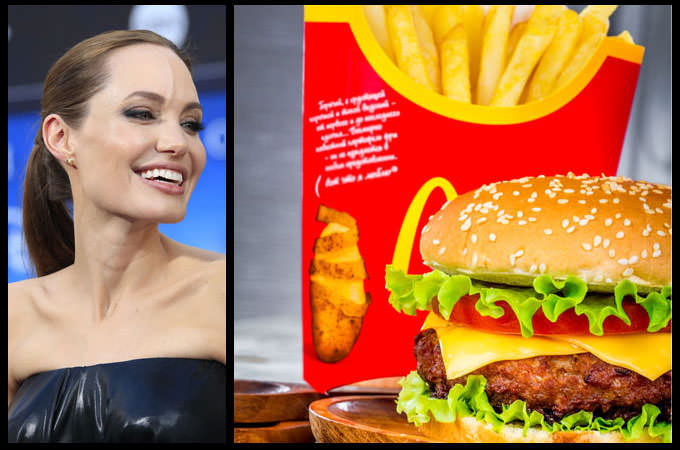 Who would have thought that this Hollywood A-lister and devoted organic food supporter absolutely loves to eat McDonald’s?

The talented and stunning actress admitted on numerous occasions that, although she values healthy food choices and makes sure her diet regime is always on track, she loves to get something unhealthy from time to time.

You won’t see Angelina Jolie standing in a line in a McDonald’s near you, however, you might see her assistant or errand personnel getting her a Big Mac once in every few months.

The mother of six also said that she has to carefully monitor her junk food intake, since she really loves it and has trouble with limiting herself.

This reality star has always been known for her figure and weight, which she tries to keep down, and always succeeds.

She voluptuous fashion mogul’s brain is absolutely packed with information, she could write a book on diet strategies and workouts (and it may be the only thing she hasn’t done yet), however, she never shares the secrets to her transformations.

However, even Kim Kardashian is just a human being at the end of the day, and there’s nothing she likes more than to relax while eating something that’s packed with flavor.

What’s little Nori’s mother taste of choice? Well, cookies and cream ice cream of course. The soon-to-be-mother for the second time can’t get enough of the sweet combination of creamy deliciousness and crunchy baked dough, and there’s no way she’ll ever stop cutting herself some slack every once in a while. 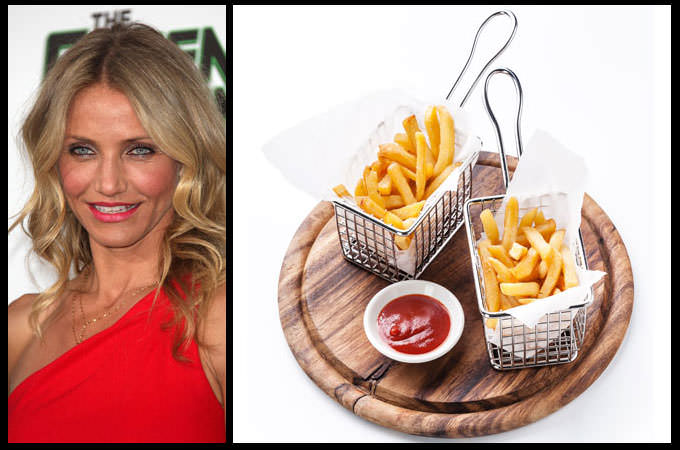 This Hollywood superstar might be thin as a stick, but she can gain weight like a turkey right before Thanksgiving Day.

Cameron Diaz is in a fulfilling, happy relationship at the moment, and people say the wedding bells are ringing like mad, however, even a bride-to-be can indulge herself with something she absolutely adores from time to time.

Diaz’s favorite guilty pleasure is a simple, American-favorite plate of French fries. And let’s face it – who can blame her? The actress isn’t the only one who can’t win the fight against some delicious fried potato slices with ketchup. However, as she doesn’t care much for heart disease, she tries to keep it down with the cholesterol-high snack. 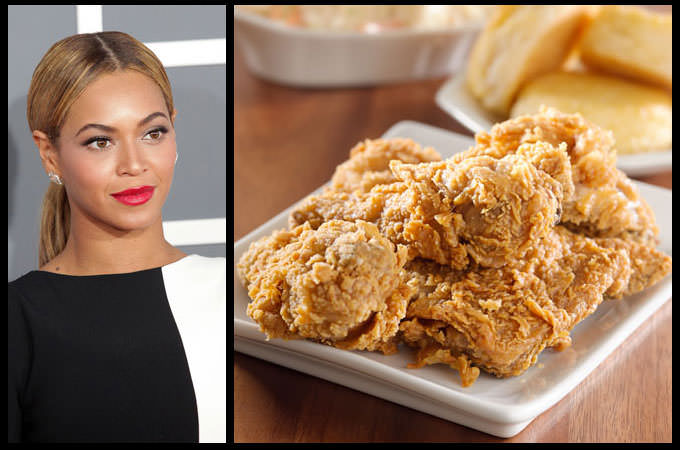 The amazing singer has a busy schedule with all of her work she’s doing and her family, however, she finds time to indulge herself with her ultimate favorite food in the world (which happens to be junk food) – Popeye’s chicken.

And no one can blame her, since this particular junk food is so delicious it would turn any vegan.

Which is a coincidence, since the “Drunk In Love” singer recently revealed that she will be a full-time vegan from now on. We wonder whether she’ll be an omnivore just for Popeye’s. Anyway, unlike us, Mrs. Carter has a strict exercise regime a swell, so her” bootyliciousness” won’t go anywhere anytime soon. 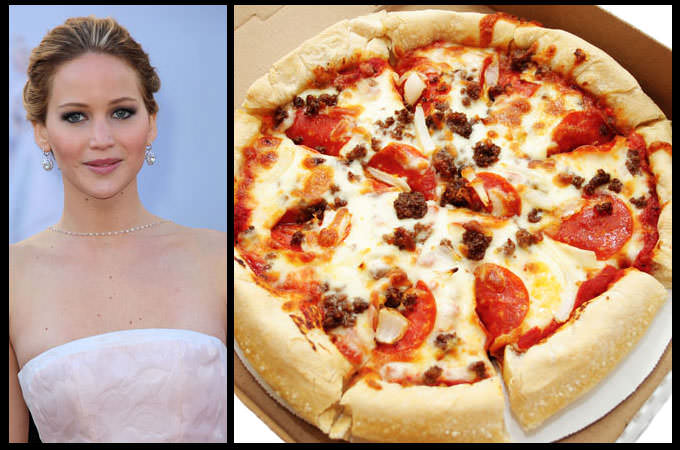 People like Jennifer Lawrence since she’s relatable and down to Earth at all times, and just like any other human being on the planet, she absolutely loves to eat pizza!

The famed Hollywood actress stated on numerous times that she won’t ever stop eating this salty version of a pie, and that’s also one of the reasons why she has to work out on a regular basis.

That’s also one of the reasons why Coldplay’s Chris Martin fell for her, since she was the exact opposite of his former wife Gwyneth Paltrow.

And we all know her stands on junk food. However, J-Law doesn’t limit herself from the wonders of the world just for looks, and she tries to have a healthy diet regime for the sake of her health, but she just can’t shake off that pizza addiction. And let’s face it, neither can we. 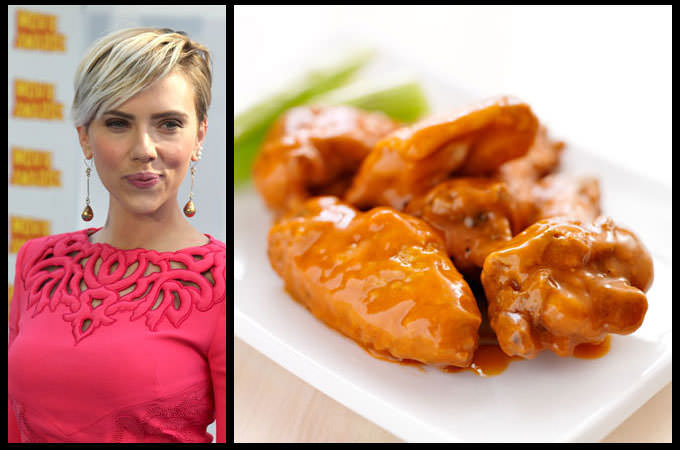 The stunningly beautiful and talented actress Scarlett Johansson is so crazy about buffalo wings, she could fly off the planet, especially if they’re spicy!

The Hollywood A-lister has always been known for her womanly shape, and it seems that we might as well have to thank this delicious hot junk food treat for it.

The blond beauty indulges herself with this spicy food as much as she can, whenever she can, and you know what – she deserves it.

She’s beautiful either way, not to mention talented and successful, and if she wants to nibble on some hot wings, she has the right to do just that. There, we’ve said it. However, she ought to watch her cholesterol level. 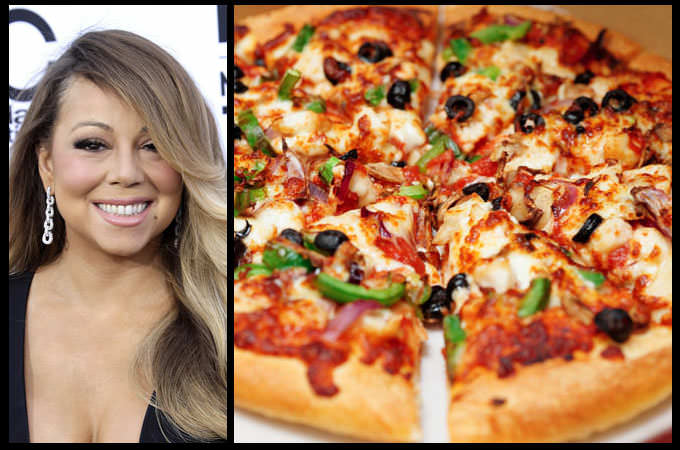 Another huge fan of the Italian specialty is the international singing sensation you might have heard of, Mariah Carey.

The vocalist has been vocal about her love for pizza more times than we can count, saying that it’s her “cheat food.”

The singer and mother of two says that she tries to make sure that she has tight weight-loss strategies as much as she can, so that she could indulge herself with pizza from time to time.

The famed performer has been making headlines lately for all the bad reasons, and she deserves to eat something unhealthy if she wants to. However, since one of those headlines involves a substantial weight gain, she might want to keep the indulgence at low for some time, as people are starting to worry about her health. 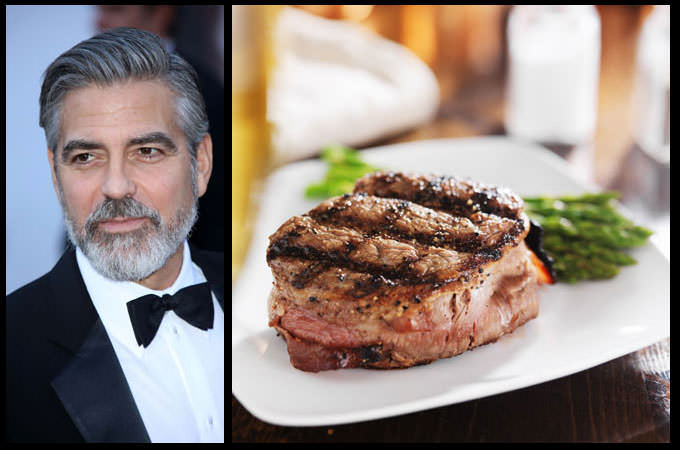 The once most desirable bachelor in the world has a tasty secret, and we’re going to share it with you since we’re that great.

George Clooney, one of the most gorgeous men in the world, just can’t help from eating steak!

As a truly real man’s man, Clooney finds the succulent stakes of the world his biggest nemesis, since he’s in those troubled years of his life when he has to pay attention to what he eats.

Georgie, you have to watch that cholesterol! No one wants you to get sick, especially not Amal.

Either way, there isn’t a steak or a steak variation dish that this Hollywood A-lister hasn’t nibbled on, and it just might as well be the secret to his delicious looks. You are what you eat, you know. 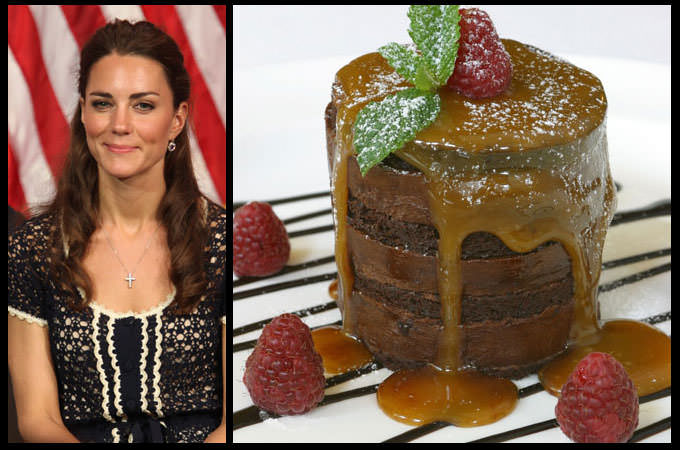 Even the Duchess of Cambridge is entitled to something unhealthy from time to time.

Do you know how much energy it takes to do all of those responsibilities and look great at all times? Not to mention having two children!

Kate Middleton is one classy lady, and we have to say that sticky toffee pudding is a wonderful choice for a wife and a mother of a true monarch. Keep it up Kate, because we are absolutely loving your royal down-to-earthness. 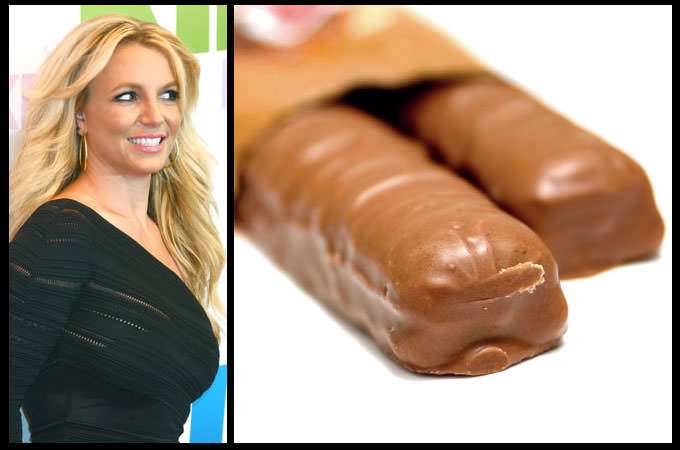 The performer never kept her love for the sweetest of all candies treat a secret, and she stated on numerous occasions that although she tries really hard to work out regularly, chocolate is the only way she keeps her motivation up.

Whether it’s the sugar in the chocolate that makes Brit workout hard, or if it’s only a bribe measure, we can’t be sure. Our bet is that it’s probably both. Spears also stated that she’s completely honest with her dietician and that the professional understands her love for chocolate. 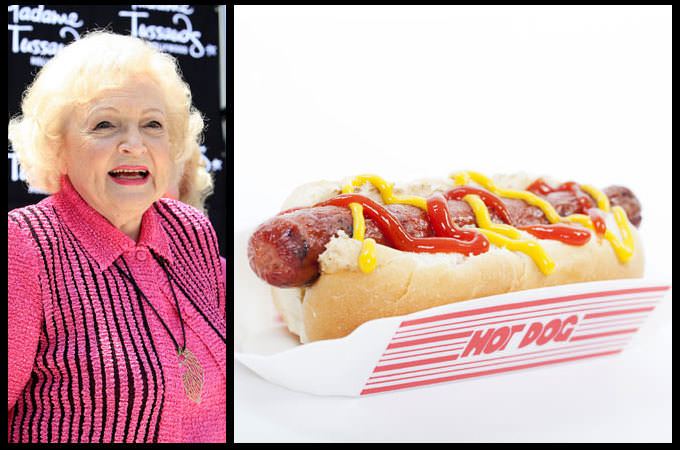 This butt-kicking granny is a true living legend, and it looks like she found the secret for a long, healthy life.

However, the secret might not be what you thought it was. Betty White revealed that she can’t live without hot dogs!

The actress, comedian, and all-around fan-favorite persona absolutely loves this fast food option, and it seems to be working for her.

The aging legend might know something we don’t about the New York favorite street snack, but we have our minds set on figuring this one out for sure. The entertainer doesn’t seem to get any older, and who knows, maybe the fountain of youth has been right under our noses for decades? 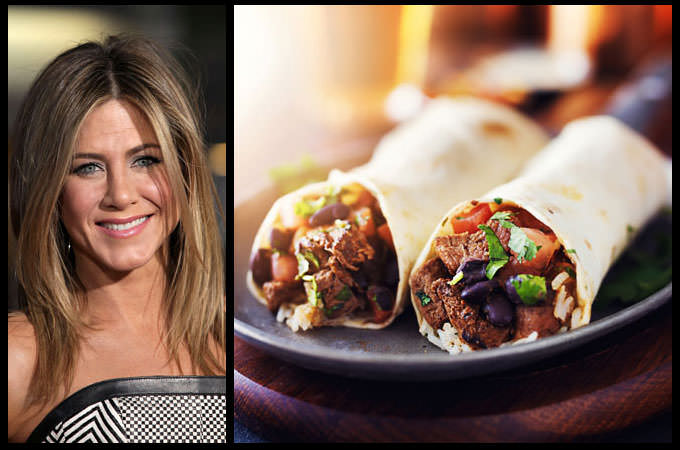 Another famous Jennifer can’t live without something that might not be as healthy as we wish it was.

The A-lister has been known as a Mexican food lover for a long time, and we can’t really blame her for indulging herself with that delicious, spicy food.

Not only does she proclaim her love for the food in everyday life, but she can also be seen in a bunch of films eating something that’s spicy as spicy can get. Much like Betty White, Jenn has found the secret for aging gracefully, and it’s of Mexican origin. 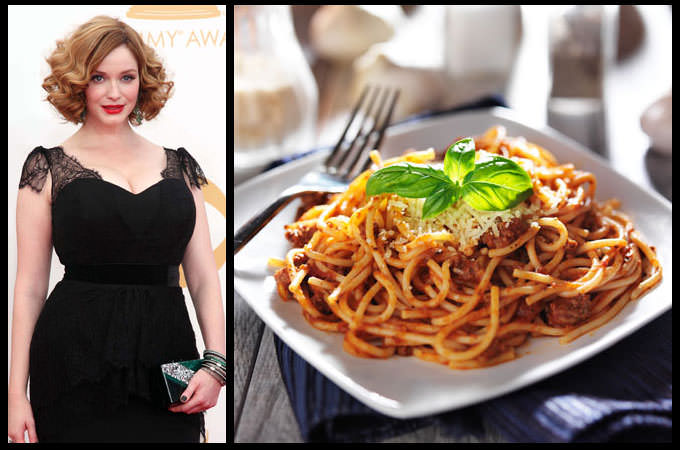 This voluptuous actress is known for her talent and curves that just don’t seem to stop. The secret to her amazing figure? Spaghetti.

Although the dish is not considered a fast food per say, it’s still a variation, especially when it comes in an unhealthy form.

But who can blame the Hollywood A-lister for loving it? Spaghetti is delicious as delicious gets, and the actress wouldn’t eat anything else if she could manage to do so.

However, since health is an important issue for the Mad Men alum, we suppose she can’t really eat it more often than indulging on it from time to time.

The pop perfection Katy Perry is a huge fast food fan, but similar to her colleagues on the list, she can’t show her love for the unhealthy option more than she already does.

The international performer stated on numerous times that her love for In-N-Out burgers can’t be measured. And who can blame her?

However, since they really aren’t the healthiest option for a everyday diet, Perry limits herself on just one occasional burger.

And it’s a good call, since you can get health issues just by looking at the menu. But that is one great looking menu, isn’t it? Luckily for the singer, she also has a strict workout regime so she balances it out.